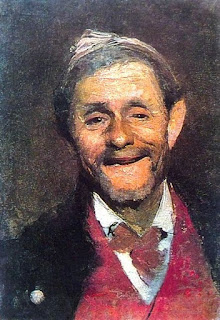 Ah, and below the chin –
the bugger that will be the death of him.
Untreated – he too old (he thinks)
for wrath of radiation beam
or cruel brunt of surgeons knife.

So this is he, this is who he is
above the faltering heart in heaving chest –
his face an echo - a diary of a life well-lived.
His mouth clenching pipe, pipe-puffing,
puffing pipe (vanilla flavour and aroma)
he reminisces on the joys of yesteryears.
He is alone – yet not lonely,
his memories’ - companions of his past and present.

(He sips Jack Daniels – no, swigs it back,
his body welcoming each soothing warming mouthful.)

He thinks: if death comes tonight I hope it comes easy –
no crushing pain of heart arrest…

But should he be blessed to live another day,
to see tomorrow – he will live it for the love of it.
But should he not he knows    (yes he knows)
that those that gather grimly at his graveside
to pay homage to his passing spirit,
will sigh,    smile and softly say:

Ah Alex,
he lived life for the love of it.

An oldie regurgitated and shared in these strange times.
Stay safe!

Shared with the good folk at Poets and Storytellers United, hosted by the lovely Magaly – cheers Magaly!

Also shared with the good folk at dVerse OLN, hosted by the lovely Kim- cheers Kim!

Love this. Poignant and a brilliant description of this character

An excellent word portrait, Anna! I like the alliteration in ‘wise, wise and wizened’, and the repetition of ‘wise’ makes it conversational, as if you are talking to me. I like the aside in parenthesis, which is also conversational, and the way the portrait builds, words like daubs of paint on a canvas, with so much detail, especially in the lines:
‘Ah, and below the chin –
the bugger that will be the death of him.
Untreated – he too old (he thinks)
for wrath of radiation beam
or cruel brunt of surgeons knife’.
I love the phrase ‘a diary of a life well-lived’.

This is what we all should be...individuals with our own character and living our lives as we want to!

Such a beautiful, loving tribute / portrait. I enjoyed getting to know Alex here.

This is just such a fun word portrait! I really enjoyed the tone and the wry observations.

There is so much power in living one's "life for the love of it". And the magnitude of that power (the great and the not so great bits) show on our skins, in our hearts, in the way we smile (or not).

I really like how much you were able to tell us through through the subject's physical description.

This character come across as one who has not wasted but lived life within the confines of his time
A lovely write Anna, thanks for sharing


What delicious descriptive words until alas! I feel I knew Alex well! Makes me want to find an interesting portrait and wax poetic!

How nice it would be to know Alex during his life or after. You paint as beautiful a picture as the actual painting. Enjoyed this.

what a warm and beautiful portrait of a person, and a unique character at that.

"his memories’ - companions of his past and present." Companions that I hope were good to him. This is a wonderful tribute and thank you for sharing.

So much respect for people who find the spirit to live life for the love of it..how beautiful that is!

We who are already in the autumn of our lives can fully appreciate this portrait and tribute to the human spirit. Every dawn above ground is a precious gem. Every moment of the Now is rife with its challenges, but honied with every ragged breath taken .

My grandfather used to say that any day you get out of bed is a good day...I suspect this man believes that as well.

Nice description: "wrath of radiation beam". I like the thought of him being alone but not lonely.

Ah, this is brilliant and meditative. A life well-lived.

"He is alone – yet not lonely,
his memories’ - companions of his past and present."

Anthony Hopkins' make up is brilliant!

HI Anna, long time no see. (That’s me being absent from blogland)
Glad to see you are still going.
A poem well worth resurfacing in these troubled times. Don’t we all feel like that? At least the older ones still left standing.