I have paper
weighted down by coffee cup
as autumn winds
seem intent on catching it, lifting it,
giving it the gift of flight.
I am stuck on 3 across
(and will marvel at its genius
when it finally falls-into-place)
and then I see him (all screwed up)
peripheral
and wonder what demons he does battle with.

A wasp alights to feast on sugar
blown by breeze to strew the table,
I am not frightened of it, of its sting -
my fears lay elsewhere (lay with him).
Will he leave or not?
My fear is that he might stay…
(I am still stuck on 3 across.)

(I marvel at it (the wasp) - tiny perfect,
life compact in black and yellow skin.)

He unsettles me,
something I-cannot-quite-put-my-finger-on.
Is angst communicable ‘cross café tables?
He lights a cigarette
takes one puff of it
then snaps it throws it to the ground,
with anguished moan he lights another
and sucks at it
as if there is no
tomorrow.

He has that leg thing,
right leg jerks up and down
causing chair to rattle,
he groans as he wraps head in hands,
a backfiring car elicits
startle response,
wide-eyed he half-screams,
brings fist down heavy
shattering plate and peace.

He sees them (and me) voyeuring
shouts ‘What the f**k you looking at?’
stands, upturns chair and table
and with one loud ‘F**K YOU!’
storms off into his private hell.

The excellent Brian Miller is hosting Poetics at dVerse~Poets Pub today and the theme is PEOPLE WATCHING.  This proved an easy task for me as I love people watching, letting my imagination run wild as I watch the world (and its brother) pass by.  Thanks Brian!

On edge,
on the edge,
teetering tottering,
slowly slipping over…

I have flown,
Climbed
soared above the mountains,
shook the earth,
took from it,
bled it dry,
dried myself to shrivelled husk

Zenithal,
the only way out
is down…

I freefall, spiral,
rush headlong
down to dwell
amongst the dirt and ashes,
remains of life.

Trapped, cornered,
hedged in within myself,
no way out.

Teetering tottering
on  (the)  edge,
Sometimes despair
brings with it
nought but a desire to fly 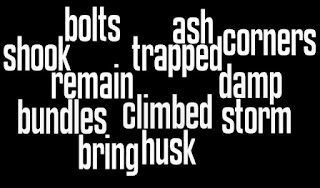 With thanks to Tess at The Mag and Brenda at The Sunday Whirl (Wordle) for their inspiration.
Posted by hyperCRYPTICal at 08:50 36 comments:

Dementia: From The Heart by Norman Macnamara


Today is World Dementia Awareness Day and I would ask you to view the very moving video above by Norman MacNamara in which he raises awareness that there is a PERSON attached to the diagnosis of dementia – a PERSON who lives and breathes and so very much understands, who is hurt and affected by the stigma that his diagnosis brings as much as by the daily torment of the disease itself.

Please also read this moving account of living with Frontotemporal Dementia by Dr Bob Fay  in which he details the difficult journey in obtaining a diagnosis and the effect of the disease on himself and his family.

Further information re dementia can be found atWorld Alzheimer Report 2012: Removing the Stigma of Dementia (pdf) and help is available at the Alzheimer's Society

Please remember there is a PERSON attached to the diagnosis.

With thanks to Dr Justin Marley at The Amazing World of Psychiatry: A Psychiatry Blog for making me aware of ’s video via his excellent blog.

Is The End Of Life Patient Charter Dead Then? 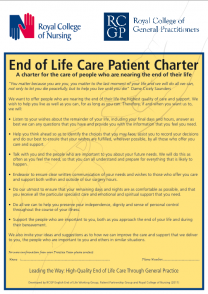 I was first made aware of the launch of the End of Life Patient Charter last June via the excellent Pulse and it too was reported widely in the media – please read this article in The Guardian.

The EOL Patient Charter is a collaboration between the End of Life Care (EOLC) English Working Group of the RCGP with the RCN and the Patient Partnership Group and its aim is laudable in that it seeks to ensure that patients nearing the end of their life receive and expect an ideal of best practice  from their GP and Primary Health Care Team.

“We want to offer people who are nearing the end of their life the highest quality of care and support. We wish to help you live as well as you can, for as long as you can. Therefore, if and when you want us to, we will:

• Listen to your wishes about the remainder of your life, including your final days and hours, answer as best we can any questions that you have and provide you with the information that you feel you need.

• Help you think ahead so as to identify the choices that you may face, assist you to record your decisions and do our best to ensure that your wishes are fulfilled, wherever possible, by all those who offer you care and support.

• Talk with you and the people who are important to you about your future needs. We will do this as often as you feel the need, so that you can all understand and prepare for everything that is likely to happen.

• Endeavor to ensure clear written communication of your needs and wishes to those who offer you care and support both within and outside of our surgery hours.

• Do our utmost to ensure that your remaining days and nights are as comfortable as possible, and that you receive all the particular specialist care and emotional and spiritual support that you need.

• Do all we can to help you preserve your independence, dignity and sense of personal control throughout the course of your illness.

• Support the people who are important to you, both as you approach the end of your life and during their bereavement.

We also invite your ideas and suggestions as to how we can improve the care and support that we deliver to you, the people who are important to you and others in similar situations.”

A letter from the RCGP was forwarded to all GP practices with the intention that they and other primary health care teams would ‘sign up’, discuss with care homes (and provide supportive training), display a poster on the waiting room wall, discuss with patient groups and also patients receiving palliative care (and their relatives) and that patients and relatives should receive a copy of the Charter.

Erm, it hasn’t happened.   Search Pulse and it is impossible to find one article as none are archived.  I did watch two videos there – one in which Dr Clare Gerada stated that GPs were best placed to initiate conversation re the Charter in care homes as they ‘know the patient best.’    Mmmmh, maybe in London Dr Gerada – but certainly not in my neck of the woods!

It is possible to find stuff on GP (online) but not much and I have never seen said Charter displayed at a GP surgery – and I do visit quite a few with our residents.

On the launch of the charter Dr Gerada stated "Care seems to break down at the very end. So often a GP has looked after someone really well, and then they are not there."

The reason for this post, two of our residents have recently died with a terminal illness and I feel strongly they would have welcomed interest in their situation from their GPs – but it was not forthcoming.  Not sure they would have welcomed their own copy of the Charter though – I certainly wouldn’t as to me it (in the format offered) would be akin to receiving a ‘Well Done, You’re Dying!’ certificate…

Is the End of Life Patient Charter alive anywhere?

With thanks to Tess at The Mag for the inspiration.
Posted by hyperCRYPTICal at 17:06 38 comments:

God she’s chewing gum with mouth wide open,
Smudged ruby lips and some teeth are broken!
‘Are you Hugh?’ she screeches, ‘You Hugh?
Ya late - ya late for our very first date!’
as she reaches across for the posy of roses.

Dithering, dithering, what to do, what to do,
a man in a panic is dithering Hugh!
‘Madam’ he stutters ‘I fear you’re mistaken,
I am not Hugh and my heart’s ‘ready taken.
The posy of roses is for my good lady wife
who is arriving quite soon on the 6.40 from !’

‘Ooooo, that’s sad that’ she utters
as she starts a-kissing
‘Stay with me for a while,
you don’t know what you’re missing!’
Heart is in overdrive,
thump, thump, thump, thump,
he prises her lips off his face,
takes her hand off his rump.

‘O Madam!’ stutters Hugh as he panics and blushes,
and tail between legs from the station he rushes,
reaches a pub orders pork-scratchings and ale
(heart’s revving down, heart’s  revv i n g   down,
thump-thump,   thump,     thump).

Silly old Hugh has been such a chump,
this lady's no lady of that he is clear
and there is a ‘Phew’ from dear Hugh as he sups at his beer.
and he makes a decision without reservation
‘No, not ever, no never ever again
will I meet a strange woman
under the clock at the station!’

Image: courtesy of wikimedia commons with thanks to the author Ralf Roletschek (talk) - Fahrradtechnik auf fahrradmonteur.de
Posted by hyperCRYPTICal at 12:59 23 comments: