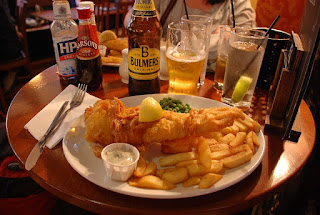 Twixt chimney pots moon glows amidst
a misty haze, and neath through thick
of silhouette of swaying trees
a window flickers candle lit.

*And she inside has cried enough (she thinks)
and snuffs out candle at the wick
and flings herself upon the bed,
and in that troubled mind of hers
with demon of the night confers
her wish of *errant husband dead.

And in the morn she sets her plan
pulls neath the sheets a *book of spells
and mixes notions with intent;
creates a gateway straight to hell.

And not for him an eye of newt
nor toe of frog nor tongue of dog,
but salami slice and sausage links,
bacon, eggs and deep fried chips
with loads of salt and full fat dips,
all washed down with sugary drinks.

*And as his girth begins to spread
as diet takes its morbid toll,
she feeds him more and more and more
and boosts his smokes and alcohol.

But best laid plans do not bear fruit
despite disease, his blackened lungs.
For determined he she be his nurse
and tend his needs eternally,
he grinds her down til on her knees
and *she the first to ride the hearse.

*For those who know me (and now suspect me) I wish to make clear that these words are not, I repeat, are not, an analogy of my recent court case in which I was the accused, although I accept that comparisons can be made.
*He wouldn’t dare be errant.  He knew, sorry knows, I would kill him!
*As stated by the prosecution, yes I had borrowed an inordinate amount of cookery books over a short period of time from the library.  They were cookery books of bygone years when we ate rich fatty stuff because we enjoyed it, and oddly enough were not fat.  Hubs and I enjoy our food, therefore no crime!
*The way to a man’s heart is through his stomach – we all know that!   I just love him so much!
*Proof positive – if it were needed – of my words being mere coincidence, as I am not dead!  I am disgusted at the actions of my vicious neighbours, who with their dirty lies to the local constabulary, brought about the ?need for the court case, a case thrown out through lack of evidence.  Hubs is not dead, he is just lost, so lost I can’t remember where I buried him…(oops!)

Frank at dVerse has us writing of irony.  This afternoon I was searching for clues of what might be served up tonight and found same at Lillian's.  It was then I remembered a poem I had written last year, or maybe even the year before (these were years when real life held me prisoner and I did not blog very much) and said poem seemed to fit the bill.  And above it is.

Kerry at Toads asks us to add annotations to a poem and that I have done.  With humour!  This gave a ‘nowness’ to the long ago written poem.

So cheers Frank and Kerry for your inspiration! 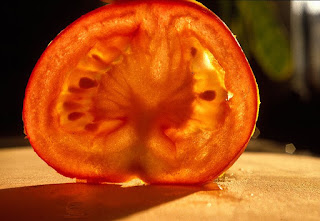 We would all pile into dads recent acquisition, his first ever motorised wheels, a light blue Morris Minor Traveller, we being mum and dad, sis Chris and me and little brother John.    This little blue beauty had opened up new horizons for us, no longer hampered were we by the limitations of bus routes.  The countryside was ours.

Mum would pack a little hamper of food, this wonderful and simple feast bringing the fondest of memories of the oft happiness of childhood.  My favourite of this delightful fayre being the cheese and tomato sandwiches, which we would unwrap from the little greaseproof paper packages mum lovingly made.  Salt was not regarded as a problem then and when making, mum would liberally coat the innards of the sandwiches with it, facilitating osmosis drawing the tomato juice until it ran into the bread and softened the cheese.  My first memory of food is the heaven of soggy cheese and tomato sandwiches (and I am salivating now thinking of this delight) washed down with what was then a treat of dilute orange juice.

I only have vague memories of our trips out, the enjoyment of our green and pleasant land.  But I do so remember the wonderful the delicious soggy cheese and tomato sandwiches!  It is a lasting and pure love!

Buds fit to bursting
feasting on sunshine, alas
no crumbs for the ducks

Toni at dVerse has us writing of Yum!!! for Haibun Monday, that is ‘The Best Meal You Ever Ate.’

The above is mine and will always be so.  It must be said that this meal also consisted of a packet of Smiths crisps with its little blue salt bag and a two finger Kit-Kat and mums homemade currant buns.

Maybe this first love is why I continue to enjoy buffet lunches, most wonderful things! ‘Please leave me, please
leave me alone’ I plead
as I turn off all the lights…

Old bones snap on the tricks of tired eyes,
tumble I do to the shock of terra firma…
as they shuffle in the roof space…
turning off the lights…

Mind is tired, forgets to remember…
father’s in my bed, telling me he loves me…
sharing (with me) awful secrets of the night…
’Please leave me alone,’    I scream (inside me)
as I fumble and stumble, trying to turn off the lights…

I lie in my bed here, screaming deep inside me,
hoping and praying they don’t turn off the lights…

Brendan at Toads has us writing of our interpretation of what Home is.  To me, home is not merely bricks and mortar, rather a sense of belonging, a feeling of safety, a knowing of unconditional acceptance, indeed, a place where the heart lies, a place of comfort and love.

Home is not necessarily just the house in which you live, it maybe your place of work which gives you that same sense of belonging, or your town or your country, whatever defines the place of where you want to be, are happy in.

My words tell of ‘Violet’ who lived in the care home in which I once worked.  She was a very confused lady and regarded and saw  the home as hers, her fellow residents and staff being intruders.  This belief made her very agitated and physically aggressive as she would forever attempt to remove us, and how deep her frustration when she could not.  She was also at great risk of falls, and if she did so, sustaining a fracture, she was adamant these strangers in her house had pushed her.

Violet was a lady who feared the night and her light was always left on.  Despite this she would become very scared and tearful, a timid shadow of her daytime self, and staff sat with her until she fell asleep.  It was a couple or so of years before something she said made us realise why she feared the night, her childhood home never offering itself in how we perceive home, rather a place of abuse…

How sad that her memories and indeed lack of memory, made the care home, to her, a place of fear too. 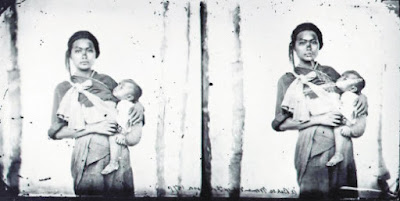 She cradles his soft innocence as he suckles at her breast, nurturing him.  All she feels is a deep unconditional love, an overwhelming love she never knew existed.  He is her world, the total sum of her.

As he grows he will be nurtured by his culture and he will turn against her.  She will become what she was and perhaps always will be, the nothingness of that that is woman.

You ask her of this and she softly replies:  It is my culture, it is who I am, it is all that I know.    Confronted, she returns the imaginary veil to her face blinding her vision, a veil that will mask her, mask who she is who she dreams to be, thus forever binding herself to her own fate.

But she will feel safe.

Sumana at Poets United has us writing of (yesterdays) International Women’s Day whose campaign theme is:  Be Bold for Change.  Above is my offering of which I am uncertain as to whether it is poetry or prose or prose poetry.  I have difficulties with the concept of prose poetry…please see previous post.

In my lifetime I cannot recall any occasion I felt second class as in gender inequality.  But perhaps I am blind to the subtleties’ of it, perhaps I was gently and not deliberately conditioned into accepting a specific role, a role passed down in generations…I don’t know.  That said I do know that gender inequality exists.

In some cultures for a woman to express boldness for change would be tantamount to signing her own death warrant.  It is not right but that is the way it is, in these cultures women live in fear (of men).

Will International Women’s Day change a thing – probably not?  Things will carry on as they are.  From an IWD  page:

Some regions should expect to see their gender gaps narrow faster than the global rate of change. Among these are South Asia, with a projected closing of the gender gap in 46 years, Western Europe in 61 years, Latin America in 72 years and Sub-Saharan Africa, due to achieve parity in 79 years. Projections for other world regions suggest closing their gaps will take longer than 100 years, namely 129 years in the Middle East and North Africa, 146 years in East Asia and the Pacific, and 149 years in Eastern Europe and . Given the slow progress over the last decade, the gender gap in is expected to close in 158 years. None of these forecasts are foregone conclusions. Instead they reflect the current state of progress and serve as a call to action to policymakers and other stakeholders to accelerate gender equality.

On a more cheerful note, please watch the video below, a video by the excellent Harry Enfield & Co.  Things have moved on for some of us, maybe not enough but one day that day might come… 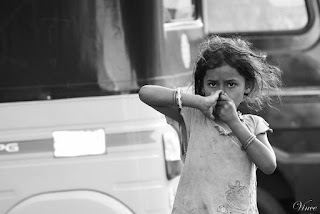 I’m struggling you know, struggling with being me, timid little mouse that I am, forever nibbling at my nails until the blood runs and the pain soothes and the heart aches.

All I want is to be liked.

Frank at dVerse has us writing prose poetry and above is my contribution.  I wasn’t going to enter as I am not quite sure  what I think of prose poetry… however, when I was just about to move away from beloved PC,  the word ‘struggling’ jumped out at me from some TV programme serving as a background noise, and well, my head became full of other words and so joining in I am!

Please know the words are not about me.