Smokers to be denied routine surgery to cut costs.

I have admitted it before - I am one of those evil people, whose smoke drifts menacingly into every nook and cranny, polluting the atmosphere with its particulates from mainstream and drift smoke as I suck away on a cigarette.  I am the harbinger of death; my second and third hand smoke infiltrating the very core of the young and innocent.  I deserve the remarks I receive from passers by who are predominately middle class and middle aged males who feel they have the right to abuse me.


I do not doubt that smoking is damaging to health and it is estimated that one in six to one in ten deaths are related to smoking.  It is probable that this estimate is correct and equally probable that it is a gross overestimate depending on what research you read.

Science and research are wonderful things, that is, unless they deliberately mislead.  Most of my research is based on data provided by Scotland as England doesn't appear to have its finger on the button here.

We are led to believe (as science provides the figures) that since the smoking ban in Scotland (March 2006) that coronary heart disease (CHD) and heart attacks (MI) have continued to decrease in numbers year on year on; a 17% decrease in MI admissions in the year after the ban.

Now this is odd!  If you visit isdscotland and download Table MC2 you will see that CHD has continued to fall since 1995 year on year on.  Research would suggest that this decline could be attributed to effectiveness of cardiologic treatments and changes to risk factors (including smoking) prior to the ban; but of course after the ban, the decline is only due to the ban!

During my research I came across the Iron fist, velvet glove blog and with Chris's kind permission I have reproduced a graph which illustrates that MI's actually increased after the ban.  Please visit his site; Chris as you will see, is not a chain smoking half-wit! 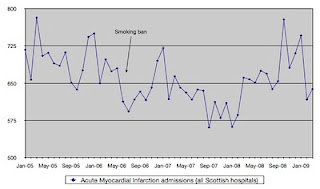 I have also researched respiratory disease, particularly asthma.  I don't have any respiratory problems nor to my sons, despite being raised in a smoking household.  I know that asthma is unpleasant  and frightening for the sufferer.  It has become more common in the last thirty years and scientists do not really know the cause, but believe it could be our change in lifestyles, i.e., central heating, carpeting and lack of ventilation in homes which provide an ideal environment for the house dust mite; less fresh food and less exposure to infections and of course exposure to cigarette smoking.  I do not doubt the latter.

It has been reported that childhood asthma admissions have dropped 18% per year since the Scottish ban, Chris has debunked this again.

You might think that I am a rabid smoker demanding my place back in the world, but I am not - I am just an ordinary person, saddened that research has been manipulated to give a false impression of health gains to suit a particular agenda.

The reason for this post is this article in Pulse.  It appears that smokers will be denied routine surgery unless they quit or complete an  NHS Stop Smoking course.  NHS Surrey has take the lead here.  Read it all, including the comments.

Who will next become society's dog to beat - alcoholics, the obese, the elderly or you?

The problem with the smoking campaign is that it makes you feel guilty you smoke. For some people this may actually get them into a vicious circle of attempting to stop, then back to smoking again and so on. Hence, this replaces smoking with the an ongoing mental misery that may led to permanent depression, especially as you put on weight too when you don't want it, then you look in the mirror and you don't like what you see too.

You know what Anna

Don't get yourself into that vicious circle, or feel guilty about smoking. Harmful as it is, if you are not prepared to stop because 'you' want to, then don't attempt till 'you' are ready. If death comes because one smokes, be it, it would probably come because of being fat and depressed too if one gets into that vicious circle. Bottom line is, it's your life, your body and 'you' make 'your' choices.

A more relaxed approach to stopping would be more successful too, so, when 'you' are ready and stop feeling this guilt.

I've never smoked but I really wouldn't tell anyone else not to. I agree with Sam about the vicious circle thing - I've done it myself with diets when I was younger.

I was a union health and safety rep for a large insurance company many moons ago when the 'not smoking in offices' thing was just starting. In general, the non-smokers wanted no smoking at all in the building but I fought and won a smoking room for the smokers.

Smokers have rights, too, even when knowing the risks, and it's not illegal unless underage. The government would surely miss the tax that they rope in from tobacco sales if they no longer got it, but with all the other health issues we're bombarded with, the NHS wouldn't necessarily benefit.

You know, not all 'health freaks' are healthy!

It's Velvet Glove, Iron Fist actually, but cheers for the link either way! Similar trickery has been done with England:

And, perhaps most laughably, with the Isle of Man:

I have to say that I was very glad when the smoking ban came in, because at that point I played in a pub band and every morning after I would wake up hoarse and coughing. I do think they could have provided smoking rooms for folk. I agree with the stats above; I don't think it's had an effect yet and I think it will be quite some time.

Thanks for the comments folks! Comp Internet connections are pretty dire at the mo and this is the second time I have written this - so fingers crossed!

Sam and Northern Teacher: I really don't feel guilty about smoking - I like it and accept that I may be damaging my health. I do consider non-smokers and never smoke in their homes even when given (unrequested) permission to do so. When I was pregnant, I gave up, thinking of my unborn children.

I just wish some of the angry anti-smoking brigade who feel justified to villify would consider me. I am also unhappy and saddened by deliberate misrepresentation of research by those in science who I wish to trust.

Chris: Apologies for the typo - comp probs led to a torturous two hour period of writing and attempting to post the post. Thanks again for your kindness.

Julie: I sort of agree with you re the ban. If it had a degree of fairnes, i.e., smokers rooms or pubs and restaurants - all would be happy. But as smokers now may be denied a hospital bed (?), I don't see concessions as a possibility.

"I played in a pub band"

Multi-Talented! What do you play Julie? Can you post us a taster on your blog? For Christmas

I do agree with you about hospital beds - I think that's ridiculous. Where would something like that stop?

I play violin. I did train classically, but there's a big folk scene in Glasgow as well, which I was part of. I might/might not dig out an old recording of the band (we split four years ago).

Anna, I left a comment on my blog following your visit and kind commments:

"Anna - loved the website; when I was setting up last month, I was thinking of having an open forum too for posts, but decided (for now) to keep it as my own whilst I get started. As an aside, given your medical profession background, my wife works as neo-natal nurse and midwife, and given the frequent perceptive 'rants' at the way things are within the NHS, I have suggested that she start blogging as a release! I'll send her over to your place to give her some ideas (if she'll let me LOL!).".