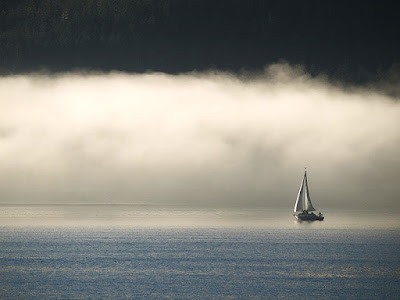 Prognathism: mandiblular: his chin juts out –
like  (he thinks) or barracuda;
juts out defiant neath tight upper lip.
He hates this.  He hates his tiny tiny little mouth,
wishes God had given     more thought to his creation.
He has weighed up the odds,
the odds the risks of complications;
surgery – nervous (as he is of it),
he will sit it out, indefinite.

Despite his sore self-seen affliction –
he has it all (he thinks) –
he has the sea and she and Lucky Lady.
She?  He has this notion she is leaving.
Is she leaving him?
He feels her withdraw,
a moody ebbing ocean leaving,
leaving in its wake a lonely barren shore.

She: distressed, stress manifests cutaneous,
her silvery scales remind her of the fish;
that fish (bass she thinks) that flapped and flailed,
hooked as it was to certain death,
its tiny tiny little mouth gasping gaping drowning.

It simmered on the galley stove,
simmered in its briny waters.
He herbed and lemoned it,
seasoned it, hot alive with peppercorn.
He savoured it, the smell of it.
Succulent, it melted in her mouth just as his kisses did.

His kisses did, and then it came, came horizontal,
(as she had always lain before him (always always wanting him)),
came horizontal rolling fogging up her mind;
lost in it    she found herself    almost invisible.
Distracted then (by it) she slowly drifted into it;
no, it took her hooked her reeled her in (flapping, flailing).

He is losing her;
lost she is to some lonely barren shore,
where darkness offers itself     the infinite,
ebbing as she is,    towards it,

Happy New Year to all and many thanks Magaly for first hosting on Poets and Storytellers United  new site – the start of many new adventures for me.

I haven’t posted for nigh on a year, initially through writers block then I guess I just got out of the habit of testing and using my imagination.

So upon your lead, I will start this New Year afresh too, although not quite…  As, as I really haven’t got my poetry mojo back yet, I have pulled an old post from 2014 to share and will endeavour to respond with new stuff on further prompts.

New or old, I'm glad you shared it. I thoroughly enjoyed reading it!

Great to read you again Anna, this is such a wonderful write, fierce and languid at once, of the sea and pulling some deep emotions up. Loved it.

Anna, you have a way with suspense and pacing. Wow. From the very beginning, the tone of the piece told me something powerful was about to take place, something that would scar or break or worse. I was ready for it, but when I got there... it still left me gasping with her. Such strong imagery.

Thank you so much for sharing.

It's so good to read you again, Anna!❤️ This is an incredibly powerful and poignant share!

Hmm...the menacing fog! A poignant combination of beauty and the sad; so much can disappear in the fog.

New or old I am always blessed to read your work. The power in this poem is amazing.

Old or late, you did good there.
Not this year, but next (my 80th), I may dare graduate from fiction and become a poet.

You had me at prognathism (and awakened the dentist in me).
A strong write. Welcome back to writing🙏🏽😊

This one was magically vivid!

What a wonderful story poem - definitely good to revisit. Good to see you back

Thanks for sharing it. I missed this the first time around. What a compelling story of love and loss. I hope for both their sakes, that it is a temporary darkness the fog brings and that it dissipates.

What a unique and creative way of describing a relationship. I enjoyed this much. Glad you reposted and that you're back.

imagine, his jaw juts out like a barracuda!
i love the slow pacing of the poem with the repetition of words, as if the protagonist is very hesitant in his actions. i see two tales in this poem, a love/loss story and a very dark gothic tale. :)
old or new, i enjoyed this poem.

Such beautiful phrasing and, yes, some kind of suspense that something powerful was taking place, as Magaly said. I really love the style and storytelling of this piece. Very well done!